Tuesday, May 5th 9a.m.  I am ready to hit the road after a fortifying breakfast and discovery the incline I parked the 1980 Volvo 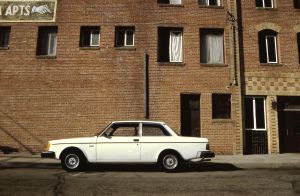 on was not needed as the starter engaged, the engine cranked, and the spark ignited the gasoline a truly lovely sound.  My next stop is Rock Springs, Wyoming once a coal-mining town now sits in an energy rich region that boasts large numbers of oil and natural gas wells.  The Oregon Trail continues to run parallel of Interstate 80 until Ogallala, Nebraska 50 miles west of North Platte there the trail veers northwest towards Scottsbluff, Nebraska and the 800’ high bluff namesake passed by thousands of 19th century emigrants then the trail continues into Wyoming toward Fort Laramie.  I stay on Interstate 80 well south of the trail slowly gaining elevation from the 2802 feet in North Platte to the 6759 feet in Rock Springs stopping, for the last time in Sidney, Nebraska at a convenience store/gas station.  While filling up cooler, clean air is sensed coming from the direction of Wyoming one and one half hour distant.

The interstate passes through southern Cheyenne were I get off to refuel and stretch; although the Volvo is just four cylinders of power it does have a voracious appetite.  Cheyenne is named after the American Indian Cheyenne nation and grew when the Union Pacific Railroad passed through on its way to the west coast in 1867.  Pausing a moment I glance south over the sparse, open land of cattle country and am reminded of a chapter of Michener’s Centennial devoted to the thrill and hardships of the cattle drive from Texas to Colorado.  Back on I-80, the overcast skies and threat of rain coupled with the fickle starter and overheating engine (window defroster on high to keep engine cool) have taken the thrill out of the journey, with only static on the radio and cassette tapes no longer enjoyable loneliness creeps in.  What did the 19th century migrant do in this situation?  Was it enough to have others around to keep them forward thinking?  To keep their mind off the home left behind they know they’ll never see again.  Solitude is great in certain circumstances and this is not one of them so to keep my mind in present time I watch carloads of locals or family vacationers, maybe business partners off to a sales presentation pass by and disappear into the horizon ahead, like watching old a friend drive off for the last time.  A well compose black and white photograph could not have done it any better as the trick works my mind no longer is in the company of anxiety and I begin to notice the surrounding natural beauty is taking on a mountainous shape.  This entertainment is done all the way to Rock Springs where I park the Volvo on a slight incline near the Motel 6 office.  I am ecstatic to get out of an overheated passenger compartment for the night, check in, and get the room key to unload baggage.  However, not even five minutes pass when that lonesomeness returns though surrounded by a civilized city of people and noise I need cold evening air.  The walk to a local grocer for take away dinner is deliberately slow even though the wind chill factor is more than I bargained for, inhaling and exhaling long, deep breaths so that by the time I reach the crowded store three days of driving alone is gone in the wind.  And it is as if there is something in that air that got into my lungs and spread throughout my body for after returning to the room, calling Dad with updates, and enjoying the greasy chicken dinner and soggy potato wedges excitement grew to get back on the road something the 19th century traveler must have felt as they neared the end of trail.

If you have not done so already, check out the first three parts of Modern Pioneer

I enjoy photography, writing, walking, nature, reading, and of course the coooolest game on earth HOCKEY! I took up photography in 9th grade and seeing the world in a different light wanting to, of course, photograph everything, unfortunately not everything comes out the way I'd like.

View all of jimberly's posts.